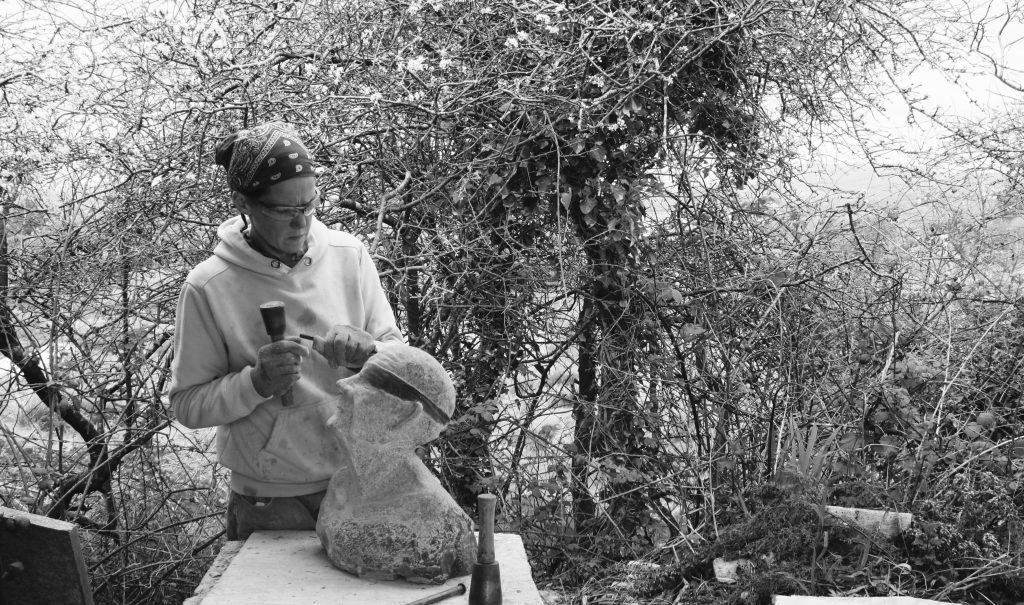 I was born in Dublin in 1974. After completing school in 1992 I did a certificate in Art and Design in DIT/ Mountjoy Square. After finishing this course I carried on with my art practice, while also working with a commercial set company and traveling in Europe. These trips started me on a love of traveling and in 1996 I went to Zimbabwe to spend time with the family behind the Africa calls stone sculpture gallery in Dublin. During my time there I visited local artists and started to carve the local stone. On return home I participated in a stone sculpture symposium with Dick Joynt, which helped me establish my work in stone within Ireland.

My work in addiction in an arts setting at this time also had a large influence on my work. In 2004 I moved from Dublin to Cork.

After a brief break from my work at this time for a few years I started exhibiting again in some group shows like Sculpture in Context and in local exhibition events, especially the  annual exhibition in Ballymaloe run by Riche Scott sculpture.

Over the year I have continued working in the Arts by facilitating in schools and at festivals. My work with the heritage in schools scheme has been especially influential in the sense that it has expanded my own education of Irish traditions, folklore and craft.

2019 was an important year in my practice as I was awarded a funded residency in Uillin, West Cork Art Centre. This residency allowed me to focus on smaller clay work and to start the journey of using traditional craft materials in my own work.

Over the last decade I have also established a small illustration business Kilcoe Studios. As well as learning essential business skills this project has also immersed me in our native plant life and the cultural history of plants, which has in turn influenced my fine art practice.

My sculptural work typically represents the human figure. I have expressed this in many ways in my primary material which is Irish limestone, all the time working within its limitations which dictates the finished work . I am not just interested in the physical figures, but what is represents – a symbol of who we all are, our behaviours and especially our spiritual needs.

In some sculptures the figure has been represented more realistically with detail and in others more shapely with no clear features. In recent figures they could almost be described as non-human, something which hints at my strong interest in the other world.

In more recent work I have been exploring working with smaller figures in clay. These can be observed together in groups and this work allows me to work with the figure as part of a whole, each individuals part in the greater picture.

In clay the work is mostly silent  and careful and quiet. With stone there is a rhythm that is integral to the work. I deliberately choose to use hand tools and the process of working is as important as the outcome. This steady rhythmic work is very meditative and I believe this rhythmic part of living along with the seasons and cultural and religious rhythms of the week and year are crucial to a healthy mind and society.

I am also constantly fascinated by the materials that are available to us – specifically the ones in my locality – local minerals, rushes, dye colours  etc. I am fascinated by how previous generations used them for both practical, cultural and religious reasons and I am eager to explore how I can, as an artist, take these materials and techniques into use in this very different modern world. This is ongoing work that I am experimenting with to incorporate into my practice

artist worked with 600 pupils in 13 schools to make a paper city for the Arts Festival.

travel in the continent.

Holles Street maternity hospital     ‘You’ created at the sculpture symposium 1998

This is a summary of the relevant work

Design and Crafts Council of Ireland

I run a small business, Kilcoe Studios reproducing botanical studies which I started in 2012 . This allows me to keep working on my fine art work in my own time but it also absorbs me in a very deep way our native wildlife and this has greatly enriched and inspired me and the work I make.